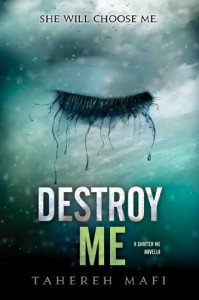 Set after Tahereh Mafi's Shatter Me and before Unravel Me, the spellbinding sequel, Destroy Me is a novella told from the perspective of Warner, the ruthless leader of Sector 45. In Shatter Me, Juliette escaped from The Reestablishment by seducing Warner—and then putting a bullet in his shoulder. But as she'll learn in Destroy Me, Warner is not that easy to get rid of . . . Back at the base and recovering from his near-fatal wound, Warner must do everything in his power to keep his soldiers in check and suppress any mention of a rebellion in the sector. Still as obsessed with Juliette as ever, his first priority is to find her, bring her back, and dispose of Adam and Kenji, the two traitors who helped her escape. But when Warner's father, the Supreme Commander of The Reestablishment, arrives to correct his son's mistakes, it's clear that he has much different plans for Juliette. Plans Warner simply cannot allow.

"I looked to build myself as a feared leader, and I've succeeded; no one will question my authority or post it a contrary opinion."
[…] "I’ve always been taught to focus on power and pain, gaining and inflicting.
I grieve nothing.
I take everything."

✳ Destroy Me answered a lot of questions about Warner and The Reestablishment.
✳ I like him even more now that I know some of what was behind his attitudes. Many of the Warner's worst flaws are consequences of the way he was taught and treated by his father - the supreme commander of The Restablishment. But at the same time that's not an excuse for Warner not be a better person. Let's wait and see how he will act in the future.
✳ What about his mother? I think she might be one of the rebels.

“This is my boy!” he says, waving a hand in my direction. “A meek, pathetic fool. Some days I’m so disgusted by you I don’t know whether to shoot you myself. And then I realize you’d probably like that, wouldn’t you? To be able to blame me for your downfall? And I think no, best to let him die of his own stupidity.”

✳ The love triangle: I'm Team Adam but I can change my mind... Adam is a nice guy and the friend Juliette always wanted. He likes her just the way she is.
✳ I think a relationship between Juliette and Warner could be interesting for them and for the story. In a way they have a lot in common and he can see her as more than just a little girl.

"And even though she hates me, I can’t help but be fascinated by her. I’m enchanted by her pretend-innocence; jealous, even, of the power she wields so unwittingly. I want so much to be a part of her world. I want to know what it’s like to be in her mind, to feel what she feels. It seems a tremendous weight to carry."

"I want her to know that I understand now. That I didn’t understand before. She and I really are the same; in so many more ways than I could’ve known."

4.5 stars Destroy Me pov his review Shatter Me Tahereh Mafi